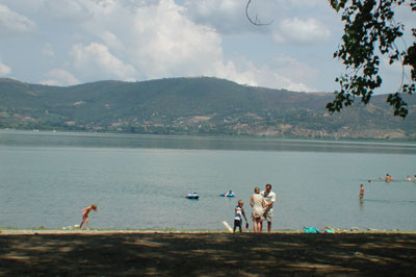 View from the shores of Lake Trasimeno

Lake Trasimeno – where’s that, I hear you ask?  The lakes in the North of Italy (Como, Garda etc.) are very well known, and let’s face it, very commercial. Quite the opposite is true of Lake Trasimeno.

The 4th largest lake in the country it lies in Central Italy, technically in the region of Umbria but in reality nestling against the border with Tuscany. What’s special about it is that it has not been spoilt. Its surface and shores were designated a Nature Reserve in 1995. There are just a handful of towns and villages around the edge, all of them small, and three islands which can be reached by steamer.

So what can you do on holiday here? Well, why not hire some bikes – there’s a 50km cycle path around the lake for a start. Wind-surfing, sailing, pedalos, sunbathing on sandy beaches, fishing and swimming – yes, the water is clean enough for that too. Oh and there are hilltop castles, and for those interested in ancient history, Hannibal defeated the Romans here in 217 BC. (30,000 Romans were killed, one of the greatest military ambushes of all time).

In easy striking distance for day trips you have the Etruscan town of Cortona, perched over 1600ft above the Lake, Perugia – the capital of Umbria and renowned for its chocolate production -, and of course Assisi, home to St Francis whose Basilica with its stunning frescoes is my own personal highlight.

Getting there is easy too – Ryanair flies from Stansted to Perugia, so just a short drive to your holiday house once you land.

At One Stop Italy we have a large range of holiday rentals in the area around Lake Trasimeno. Inexpensive apartments – example La Casina delle Fate, where prices start at just Euro 235 per week, or  villas with private pool – example Villa Susanna which has 3 bedrooms

Lake Trasimeno – in my view, it’s a bit of an unknown gem.

We use cookies to ensure that we give you the best experience on our website. If you continue to use this site we will assume that you are happy with it.OkRead more